The World's Most Misunderstood Programming Language, JavaScript has a lot of real awesome engineering under the hood. It's the language of the World Wide Web in it's own right. JavaScript is designed for the web, that means it's supposed to be asynchronous, often this is what creates confusion among most people trying to learn the language for the first time.

But what the heck is Asynchronous?

The setTimeout function is probably the simplest way to asynchronously schedule code to run in the future:

If you are only familiar with synchronous code, you might expect the code above to behave in the following way:

But setTimeout does not pause the execution of the code. It only schedules something to happen in the future, and then immediately continues to the next line.

Why we need Async?

An asynchronous nature is requisite because of the environment JavaScript is built to work in and the kind of interactions it is used to accomplish. When building real-world applications, you are going to need to access resources or interact with applications on the outside, for instance look at the following code.

From a project I've been working on, it is a Vue component that makes two API calls using the lms.call() function. Both getCourseDetails() and getTopics() is supposed to execute once the component is mounted. Now each of these make an HTTP request to an API endpoint that performs certain operations and returns some data. The thing about these operations is that they take time; there’s always a delay between the start of the operation and the response. And for JavaScript, this presents a very fundamental problem.

Since JavaScript is single threaded, the browser can’t interrupt a running script, Even if the script is just waiting for the server to complete a certain task, the browser will simply be stuck, it can't even render any UI, listen to any interactions.

Now all you have to do is call this function. Typing in wait(10000) will freeze your browser for 10 seconds. Trying selecting a text or clicking any link during that time. Even closing the tab won't work until 10 seconds are up. For this reason JavaScript cannot multitask if it were to be synchronous. This is the reason why JavaScript has to be asynchronous.

Callbacks are functions which are sent as an argument to another function and are invoked when a certain event like a HTTP response happens. It's essentially a stub or a piece of code that you’ll pass to the function say setTimeout() that the browser will store until needed. Then when an event of interest occurs, such as a timeout or HTTP response, the browser can handle it by executing the stored callback function. Again here it is important to understand thatwhen you initiate an operation like a timeout or a request, the browser does not wait for it to continue, the script just keeps on executing. The callback is executed only after the original script has fully executed. The following is probably the simplest example of a callback:

Real world usage of callbacks can actually result in some pretty bad looking code, often referred to as callback hell, and if you have been a JS developer for a while you might have heard the phrase callback hell before. callbackhell.com is probably the best site to look if you wanna understand callback hell. 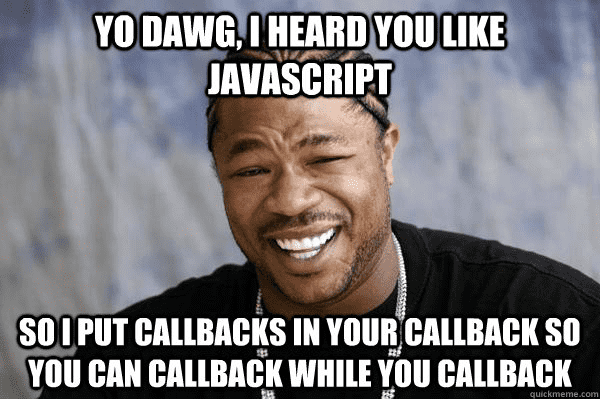 Callback-based code inevitably ends with developers having to write pretty much unreadable and even unmaintainable code to some extent. And until promises arrived on the scene, complex callbacks were required to do anything useful with JavaScript.

A Promise is an object that represents the completion, either success or failure of an asynchronous operation as well as its resulting value. The way we use promises is that instead of passing callbacks into a function, a promise is a returned object to which you attach callbacks.

Unlike old-style, passed-in callbacks, a promise comes with some guarantees:

One of the great things about using promises is chaining. This allows us to write code that executes in the order you'd expect. Semantically this is much more readable and maintainable.

The following two examples can help you understand the apparent difference between them.

Promises give you the performance benefits of asynchronous code, without the loss of clarity.

The syntax for a Promise is simple: new Promise(executor);. The executor is a function that is passed with the arguments resolve and reject.

P.S. There's a better way to write that function

The other way of creating promises is the async-await syntax. Without explicitly writing promises. async/await is arguably a more elegant way of writing asynchronous code, giving it a more synchronous feel semantically. Using async and await you can implicitly create promises and handle them as well.

Here's the syntax for it

Let's look at the following example

As you can see async-await provides a much nicer syntax in more complex scenarios with loops or certain other constructs like try-catch.

There are many benefits to this new scheme.

If you want to learn how this works under the hood, I highly recommend watching this talk by Jake Archibald at SmashingConf and maybe also read this article at MDN.

Learning about asynchronous programming is probably the first step in mastering JavaScript, and this article covered pretty much all you need to get started. More about JavaScript in future blogs. 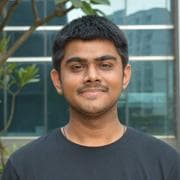